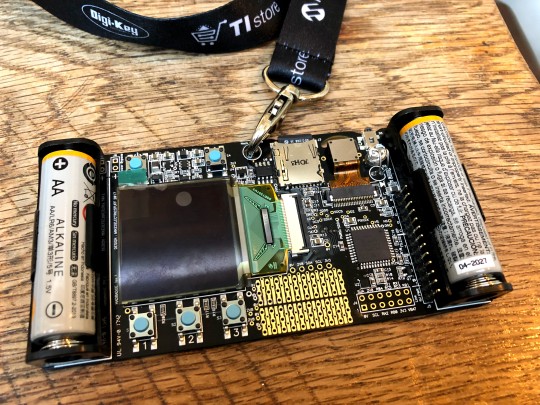 At the Hackaday Superconference this year Blaine and I finally decided to try our hand at a conference badge puzzle. The cambadge was introduced a month before the conference with the source code following shortly after so you you could prepare hack ideas and even start prototyping shields and addons. In their words:

It’s a camera. It has games, and it’s designed by [Mike Harrison] of Mike’s Electric Stuff. He designed and prototyped this badge in a single weekend. On board is a PIC32 microcontroller, an OV9650 camera module, and a bright, crisp 128×128 resolution color OLED display.

There would be prizes for best hardware hack, best app hack and even a film fest prize. But most importantly, there was also a puzzle prize. The puzzle firmware was implemented by Mike Szczys with the ciphers being developed by Jeff Rosowski (Krux).

Navigating to the puzzle menu revealed three options in binary, 00, 01, 10. 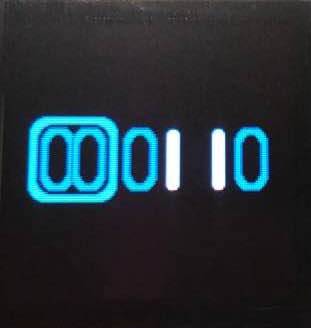 00 was some graphical 'game', 01 appeared to be a reciting of the hacker's manifesto, and 10 was a ouija board. That's all the information we were given. 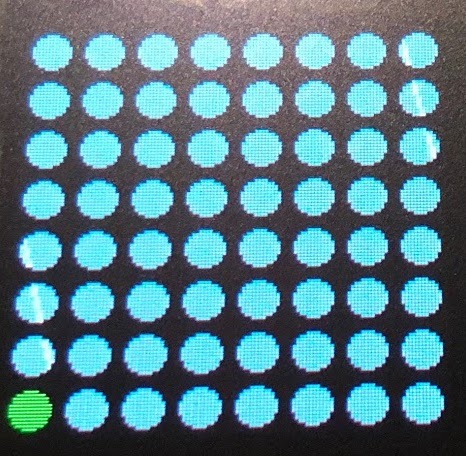 We halfheartedly played with the 00 puzzle while trying to be social during the pre party and started to put together a ruleset. A green cursor could be moved around an 8x8 grid by tilting the accelerometer. One button seemed to ‘place’ a red circle under the cursor. Further placements that shared a row (vertically, horizontally or diagonally) would light up the row in orange. 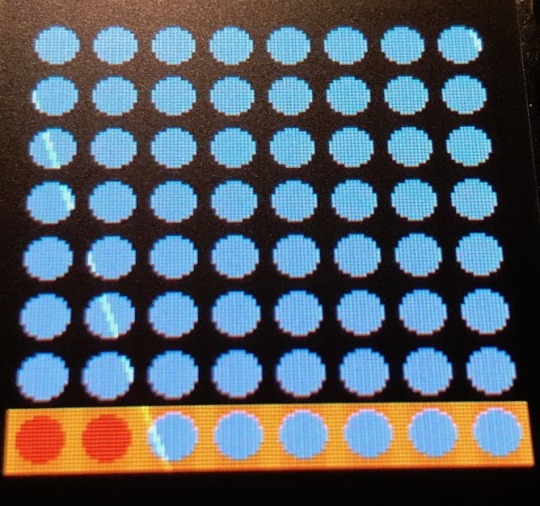 This was presumably a failure scenario but it was puzzling that we still had control of the cursor. A very jetlagged Scotty from StrangeParts got six placements before giving it up and handing it back, suggesting to google it or write a script to solve it. We finally figured out the failure screen allows you to remove a failed placement and continue the game. This allowed us to put down a random six placements and continue taking back movements until we had all eight which went surprisingly quickly. In just a few minutes and roughly five take backs we had "Winner Winner!" printed on screen. 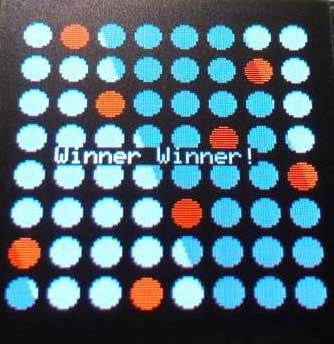 Suspiciously, the menu screen also now has a set of hieroglyphic symbols under the 00 menu item. In googling later, we’d find out later this is a Queens Puzzle and we got a bit lucky. Theres 92 possible solutions but our methodology is called iterative repair and does not guarantee a solution. 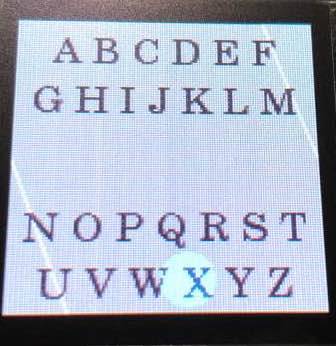 We talked to John Dahan who won last year by using the strings command on the binary to find the success email to skip all puzzles. Strings is a common utility that prints all ascii characters it can find in a binary. We talked to Mike who said that wasn't going to work this year, but were were undeterred. Before even bothering to understand the puzzle ruleset we just started looking at the scrubbed source and production hex file. The source was definitely missing the puzzles, though we did get a dist folder with intact elf files. That could come in very handy and also means we don’t have to install MPLAB-X IDE ide to generate it myself. The .hex file was strange though. Generally .hex are intel hex format, ie ascii hex code representation with checksumming, but this was a binary. We wasted a bunch of time here remembering obj-copy stuff, only to realize we weren’t gaining anything and this was indeed a binary we could utilize as is. Running "strings Badge103.hex" output the results in this gist.

After entering eight letters into ouija board the screen reads "What was that?" and appears to tell you which letters you had right by "X"ing out incorrect letters. 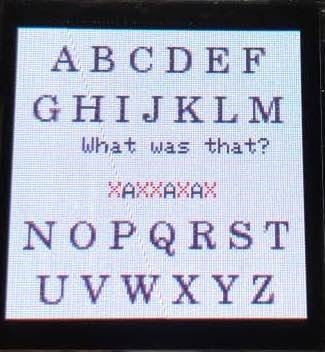 This would be super easy in retrospect, but hacking was way more fun. We searched the strings list for "What was that" hoping to find any suspicious text around it.

HACKADAY is indeed eight characters which when entered was answered with "The planchette moves by itself:" and the code "PNIRHJZYL GSIXDF WFDNXJF JH CZDRI." 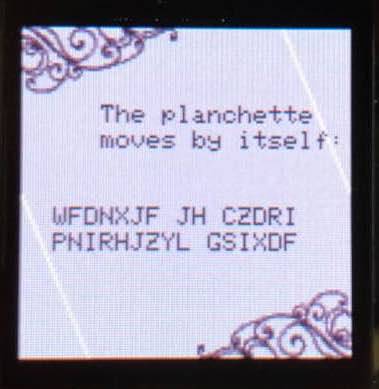 Too lazy to bother cracking the cipher we entered "MARKUSHESS." Though we still have no idea how to crack this code, Markus was the hacker from Clifford Stoll’s The Cuckoo's Egg so we weren’t surprised to receive an egg image. 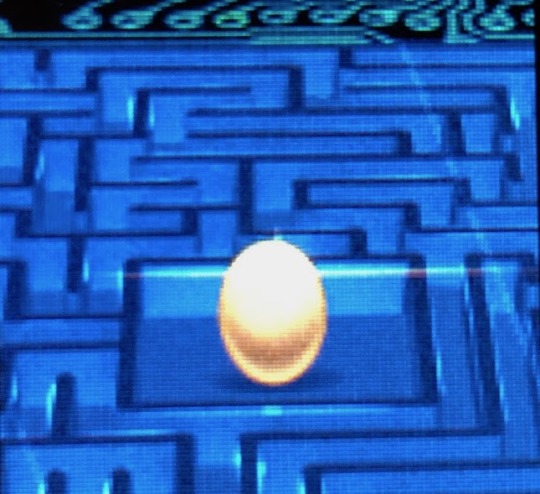 We were subsequently kicked back out to the puzzle menu now with more symbols. 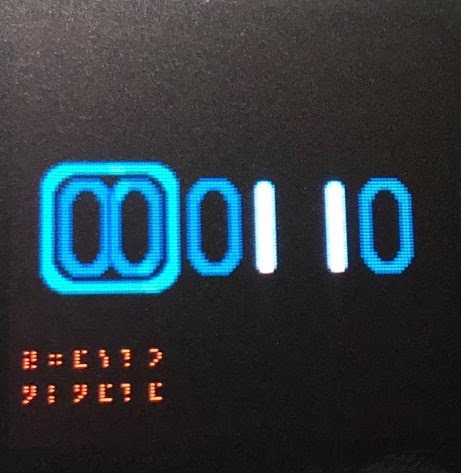 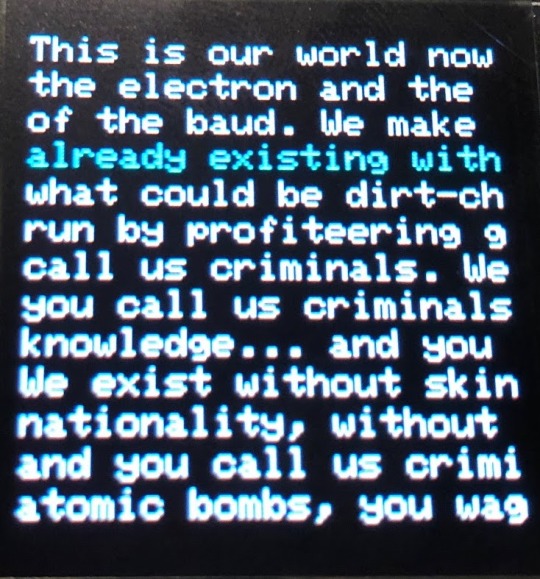 The puzzle consists of twenty-seven lines of the Hacker’s Manifesto where you must scroll each line left or right to read it on the tiny screen. For some reason the cursor always starts at the fourth line which seems odd. At the bottom there is a list of twenty-seven negative and positive numbers with a four alpha character input to presumably complete the puzzle. 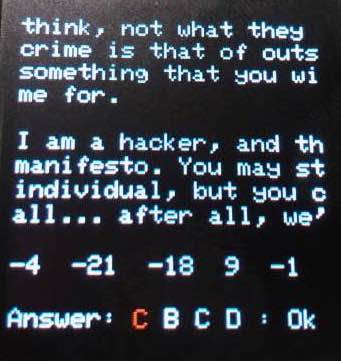 It seems obvious that the list of numbers maps to the lines of the manifesto. We looked to see if aligning the rows might spell a question in far right or left column that we could answer with four characters, but couldn't see anything obvious. 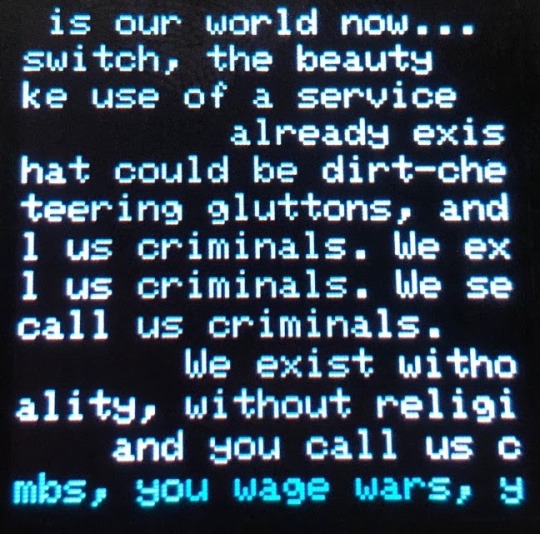 It was a huge pain to click buttons and invariably the badge would turn off or we’d get distracted and lose our place. We glanced through the strings dump for anything that might make sense for puzzle 10, but didn't see anything this time. As the party was ending we spent time running down mysterious QR codes that showed up around the venue thinking they could be related somehow, but were thrown out before we could get more than a few. 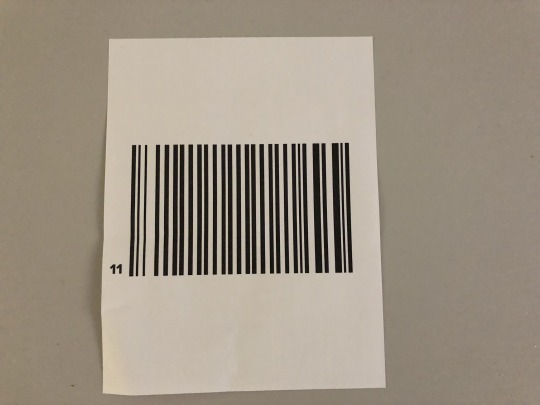 Later we woudl find there was a (seperate) prize that unlocked on the badge if you scanned all ten of the mysterious QR codes sprinkled throughout the venues.

The next day we were bored looking at puzzles and wanted to do more reverse engineering. I've been looking for a reason to get better with Radare forever. Radare lets you snoop through binaries, disassemble them, rebuild the function graph, and even edit the code in place! So not unlike a crackme, we could presumably find the code that prints Winner, backtrace to find the branching instruction that decides success, and hardcode it to so that when we enter the game it gives us the winner screen. TLDR feel free to skip this section as we didn’t get anywhere, but we would love guidance to be better at this for the next conference.

Radare has a bit of a learning curve, as described by a slide from a recent talk from the founding developer, pancake. 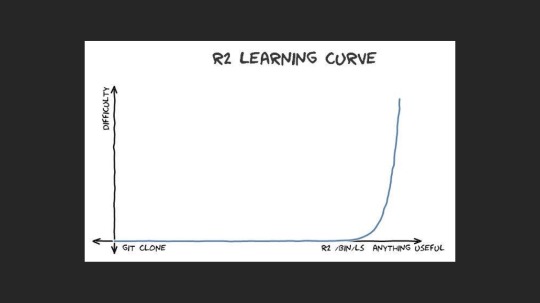 We can open our binary file in Radare and analyze it for functions, printing the results.

We should see a huge list of functions, but sadly we don’t. Earlier we found someone saved us having to install MPLAB-X IDE and we also have an unmangled elf to mess with.

That’s what we’re supposed to see! We can even visualize a complete call graph. 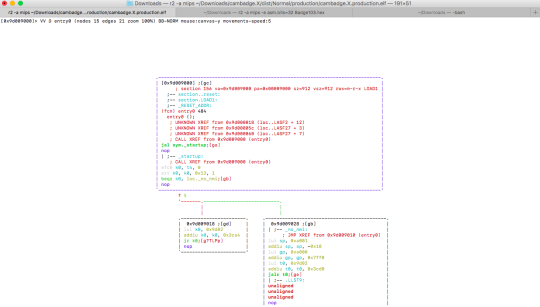 But remember, we know this has all our puzzles stripped so there won’t be much to see here. What we want is this view in our puzzle inclusive binary. Why doesn't our binary ‘hex’ file load cleanly into Radare? Presumably the elf file has a bunch of debug info like sections and entry point (reset vector) to help set up Radare automatically which we don’t understand how to do manually. So how do we help it? In our production dist files we also have a .map file that has the function names and addresses in it. There we find the reset address

And from cambadge.X.production.elf we can get the entry point(reset vector) to confirm

Back to our puzzle inclusive binary code, Let’s search for that reset vector bytecode "0224 400f" as that shouldn't have changed even with puzzles stripped out:

Found it! Maybe we can shift our 0x00000e80 address by 0x9D008180 so it becomes 0x9d009000 and Radare has more success analyzing functions? This is where we gave up though. Anyone reading this please reach out if you can help us understand Radare better for the next conference.

A day lost, we went back to solving it the honest way -- sort of. Blaine wasn’t even an official attendee so we were having to share a badge. Since we were armed with the strings dump of the manifesto text and list of integes we turned to node to script something to print the columns so we could maybe see what we couldn’t see with our own eyes.

Still, nothing looked right and we went down a hundred other rabbit holes that didn't work out, all the while begging Krux and Mike for any guidance. Finally when the conference ceremony was just hours away Krux helped us find our script had an off by one error. With that fixed it turns out all this time a middle column read "realbunniehuanghardwarehack" Bunnie was perhaps first known for hacking the xbox. "Winner Winner!" 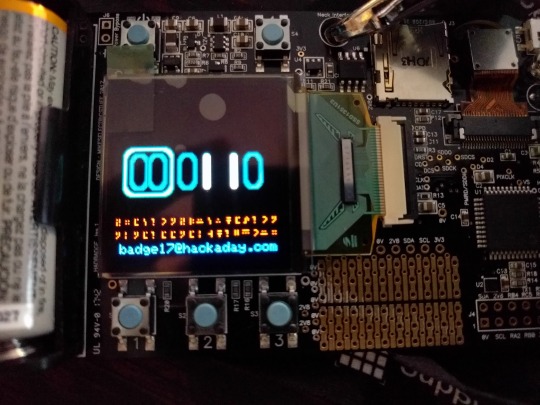 Now we had a third set of hieroglyphs and "badge17@hackaday.com". To be fair we saw this email in the strings earlier, so we're pretty sure we'd be seeing it again. But what were these glyphs?

Several, especially the last one sure looks like unicode but we couldn’t find many of the rest. We spent a lot of time on that before asking Krux who didn't seem interested in that line of reasoning. We decided to do a transposition arbitrarily to the english alphabet just to play with the characters. Transposing the first character to a, and so one, we got "abcde fgahidjkclefg gmgce ccgcm nkeopfi" There were only 16 distinct 'letters', with c, g, and e being highest in frequency. However this tiny subset of text just doesn't lend to any kind of frequency analysis. We spent a lot of time thinking the spaces were useful and that "ccgcm" would be an odd word with double repeated starting letter. Llama didn’t seem likely, but you never know. We looked at brute forcing rot, morse and other symbol alphabets but didn’t come up with anything that worked before we finally ran out of time.

During the badge ceremony one other team had apparently also got this far and was awarded some cash for their efforts. Mike and Krux spoiled the last puzzle on stage, it's apparently the Commander Keen, Standard Galactic Alphabet. When translated it reads: "PRESTONPLUSWHEATONNINETEENEIGHTYFOUR" which is a Last Starfighter reference. Presumably emailing "Last Starfighter" to badge17@hackaday.com would have won us the that sweet $256 prize.

Huge thanks to everyone involved at Superconference. It was a crazy lineup of amazing speakers. It was also awesome to see so much money given away to the Hackaday prize entrants I had been bumping into all weekend. Huge thanks to Mike and Krux for getting us to commit to a badge puzzle for the first time and for helping us through to the (very) end. 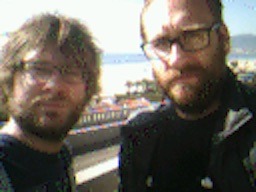