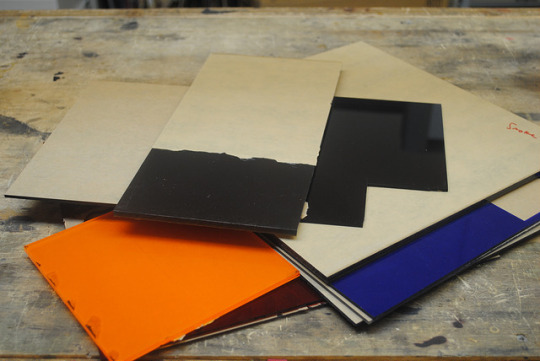 A year ago as an experiment in sales and in the in the ability for passion and ownership to drive responsibility in a community space, I set up a store inside @heatsynclabs to resell acrylic for our new laser cutter.

At HeatSync we have many people using a laser cutter for the first time, and it can be daunting to have to also learn how to buy plastic just to make a cool thing. Even for experienced laser users, good plastic can be hard to come by. Plain clear acrylic can be found at home depot, though possibly not the best quality for laser cutting (extruded is more resilient than cast) or in a thickness or size you might want. Online shops offer many different colors, but shipping is costly and takes time! Local shops will sometimes sell small quantity of what they call 'remnants' but more often than not you have to buy plastic in a 4'x8' sheet costing between $75 and $180 each!

Other spaces we've been to have had large markups on plastic, ugly colors, a messy scrap bin, or worse, nothing to cut at all!

My goal was to have a really nice selection of nice (often transparent rather than the boring opaque) colors available for our laser cutter.

I researched for weeks, calling around finding the best prices, and also looking for deals on who had a sheet of some exotic color lying around which they could ship with some other order. I ended up spending $1074 on plastic from Port Plastics in Chandler, AZ who shipped several other orders to me from their suppliers mainly in California. Frankly it was more than I wanted to spend, but was the only way I could get the selection of colors and sizes at the prices I needed. I bought fluorescent yellow, fluorescent blue, red, blue, clear, and HeatSync transparent orange and black in 1/4" and 1/8".

I also paid $152.54 for a locker that was sized perfectly for the plastic as well as some flashlights and other electronics for prototyping a lit display and self checkout square app for an old iphone I had lying around (which I never did finish.)

Besides labor of researching, transporting, and up keeping the station, I had no other costs. I did no marketing, paid or otherwise.

Bunnie talked about hardware markups and needing to hit sweet spots like $99 or $149 in a recent interview he did with Make:

A general rule of thumb when selling to wholesale is to double your price, so you keep that, and that your retailer will double again to sell to public. So if it cost you $10, sell it for $20, and they're going to sell it for $40.

However back then when I set out I'd never sold anything before in quantity, read that blog, or traveled to China to learn about manufacturing.

My markups were derived from other local and online vendors, what I thought people would pay, and guessing. My goals were 160%, 185%, 235% for 2'x4', 2'x2', and 1'x1' sheets respectively. The hope was to incentivize larger purchases of acrylic to move stock quicker.

For brevity I'll just post my spreadsheet for clear, 1/8" acrylic:

As Bunnie talked about in his interview, I instinctively found that I had to hit quantization numbers. Plastic needed to cost $5 dollars, or $10 dollars, not odd numbers in between like $7.25 or $3.50. What this meant in the end was needing to settle for lower margins on certain sizes, or needing to push the costs up. As you can see, the reality was close to my goals, but not exact. On 1'x1' I wanted 235% markup, but only hit 213%. On 2'x2' I wanted 185% but I only got 160%. However, on 2'x4' I hit my mark perfectly at 160%. The other colors and sizes were very similar to these numbers, slightly above or below my goals.

Of course I wasn't looking for a monopoly on plastic at the lab--despite the fact that I named my business The Acrylic Magnate. Everyone was still encouraged to bring in their own plastic, and I specifically already had been tracking down cheap cut offs from plastic suppliers so we had, and have continued to have an awesome stock of free plastic, wood and cardboard for laser cutting.

I also wanted to be as 'open source' as I could be so I listed all my research on suppliers and prices on our wiki.

For the past year the station has been running successfully. I have a clear cash box out with three five dollar bills in it for people to make change, a price list, and my local tax documentation (oops, forgot to add that into my costs). For this wrap up I am going to assume I haven't been stolen from either in plastic or in money and that people haven't messed up prices in my favor or otherwise--which I believe to be true in both cases.

Because the station is setup and you can just pay there (and because I couldn't get a good square or other point of sale system set up) I don't necessarily know what I've sold, or for how much. I know business majors out there, I can hear you screaming at me. Where I could though, I've actually been able to track down most of my sales as we're a small enough shop.

So after a year I've made

thirty individual sales and grossed $430, or 1/3 of my initial investment. Apologies to all the business students' families whose loved ones just killed themselves on my behalf.

So thirty sales is obviously just... very low. As big as our space has gotten, we really don't have much walk through traffic, certainly not what we saw when we were located within Gangplank who had church groups and football meetings traipsing through everyday. Secondly only some small percentage of that walkthrough traffic is going to find a sponsor to use the machine, or go through the whole class and need plastic. So sales of acrylic currently seems to be a poor proposition in general.

So what could be done differently? Well, first a question, how many people used my material vs bringing their own? I can't know this, but anyone from HeatSync reading this knows I keep tabs on nearly everything in the lab so I'm actually quite sure. Despite that fact that HeatSync is an awesome community of smart people very few of them went out and bought material of their own and I would argue a large majority used my stock! Via this, and anecdotally the few people that bitched to me about my prices, I believe we can know that my prices were reasonable.

Finally, as we many of you out there noticed I said a typical retail markup is 200-300 percent and you may have noticed my markups were only 120-230 at best. As we know, my prices were largely considered reasonable which means I could clearly attempt to raise prices to meet demand (or lack there of).

So as an experiment in sales, this wasn't a very successful endeavor. I misjudged our growth, our foot traffic, and the amount of plastic needed by people when they share their scrap. All is not lost obviously, there were many reasons for me to set up the station other than making money. HeatSync has had, as far as I'm concerned, a really cool acrylic station with all sorts exotic colors for sale 24 hours a day 7 days a week. Many here have made really cool things with my plastic, and have thanked me for keeping it available. And of course I still have my stock of plastic. If I sell all of my remaining 1/8" stock and none of my 1/4" stock (or some combination thereof) I'll have made my initial investment back, and that seems likely over the next year or so as we continue to grow. Finally, as I mentioned, I also retain the option of raising prices.

So what about this capitalistic passion driving responsibility stuff I mentioned? Historically we've had trouble at HeatSync with money based endeavors. People largely dislike charging for things, even when necessary, and hate having to value themselves or others. I also believe they dislike making money for others. Case in point we've sold Arduinos and other electronics gear as fundraising for the past two years already! Did you even know that? Even though its been two year, I can't give you any interesting numbers on it, no one at the lab advertises it, and the board is always busy doing 100 other things than manage or grow it. It turns out no one came here because they wanted to work for Radio Shack for free-- they came here to hack.

So did I take care of my little station more than I would have if HeatSync owned it and I just had (yet another) task? I would say resoundingly yes. I have the numbers for my own business, and I wrote this blog post here, didn't I :) I always kept the station clean, cash available for change, and plastic cut to every size. But I have to admit I didn't do all I could. I knew very early on I wasn't making, well any, money from my endeavors. Had they been profitable I think I would have spent more time on it. I wish I would have gotten the lit display and POS systems set up, at least as an example for others to try similar experiments. But in the end, I know I did more, and kept it going longer, than I would of if I was making money for someone else.