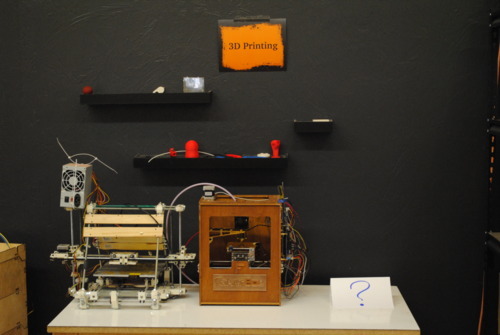 I've been torn on what 3d printing technology to look into next. The Fakerbot has still been far too finicky and far too difficult for most of our users to use on a regular basis.

I've personally moved away from the idea of the Rep Rap for now. I'ts a beautiful goal, but I'd rather spend the next 5 years actually 3d printing rather than figuring out how to replace all the precision parts and processes with cheap and ubiquitous not-terrible ones. Precision in precision out...

A sexy underdog right now is the Ultimaker which has x and y movement on the print head and the z on the platform which, combined with some good firmware, are allowing them to do much larger and faster prints. It's got some of the community of Rep Rap and Makerbot, but still the precision of laser cut and machined parts.

Or we could move towards some of the more commercial machines like the impressive, but delicate, Z-corp that made our Theo Jansen Walker. Those retail around 20k and the binder and powder are costly as well. You can't deny the output though...

Finally there's the obvious answer, just stick with the Makerbot guys. My philosophy has always been to stay where the public's attention is, even if there are shortcomings. They won't be behind for long given the amount of engineers they have working on the problem, both within and without. And, the only thing keeping the Fakerbot from being a thing-o-matic is the mk7 extruder and the larger build size.

What say you guys? Where do we put our money next?